In 2017, after one of the most recognizable gaming brands entered into a business relationship with the renowned iGaming developer Ainsworth, the title Pac Man Wild Edition found its way into the mainstream of the industry. Originally created by the company Namco Bandai, Pac Man has been a cult classic and an iconic symbol of the 1980s arcade era.

How does the little yellow puck-shaped character manage to translate into slot form? Is there something else that can impress both beginner and seasoned players than just simple nostalgia? Our Pac Man Wild Edition slot review will reveal the answers to these questions and also explain why this particular title continues to be featured in the portfolios of the best new casinos in the UK and the rest of the world! 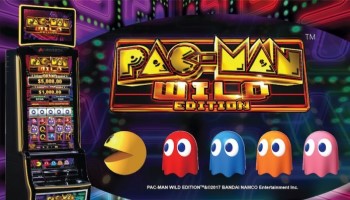 Although the only piece of Pac Man media that seemed to feature some kind of a storyline was an animation series from the beginning of the 80s, people don't seem to mind the fact that the slot game doesn't have one.

If we were to guess what the plot of the Pac Man Wild Edition slot game is, it is to chase Ghosts, collect keys, and uncover the treasure of the yellow ball-man himself. Still, the famous theme of this branded game is more than capable of garnering interest.

The Pac Man Wild Edition Slot Machine and Its Features

With a modified 5x3 reel layout and classic rolling reels, the Pac Man Wild Edition slot machine looks both modern and traditional at the same time. One thing to mention is that the game also has an additional reel-row at the very top of the gaming interface. We would have counted it to the regular layout of the game; however, the set of symbols on that extra reel-row are unique and have different functions within the game. Some of the online casinos that offer the slot are:

The Pac Man Wild Edition slot operates with the use of 13 different symbols – Power Pellet, Pac-Man, Scared Ghost, Red Ghost, Blue Ghost, Orange Ghost, Pink Ghost, A, K, Q, J, 10, and 9. Low and mid paying symbols such as those based on the deck of cards as well as the ghost ones will be used to form successful combinations; however, it is the high-paying symbols that will be used to enable the different bonus features of the game. 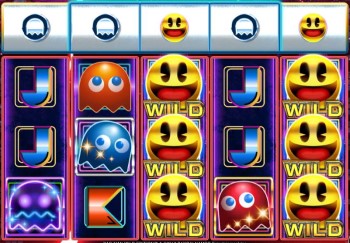 While essentially having a 1x5 layout, the silver-lined extra reel is going to initiate and stop with every single spin. One of the special things about this particular feature is that it has only three types of symbols – Pac-Man, Key, and Ghost Pattern. None of these symbols will form a combination that will produce a monetary payout; however, it will do much more.

Depending on the type of combination formed by the extra reel, you can expect a different function to engage every time! With that being said, if you're lucky enough to land a Pac-Man symbol, it will immediately expand beneath the reels it is located on top of and form a full wild reel! This will substitute all other symbols except for Power Pellet, Pac-Man, and Key. The Ghost Pattern symbol is not going to affect the game in any way, which is why you shouldn't hope to land it; however, the same can't be said about the Key symbol.

The Keys Unlock an Additional Chance for Bigger Wins

Key symbols are known to appear only on the second, third, and fourth positions of the extra reel-row, and a player will need to land all three if they wish to enable the bonus feature. Once the three keys are landed at the top part of the screen, you will notice a field appearing in the middle, which will have different multiplier prizes that will shuffle through. Players will have a chance to win prize money with a multiplier that goes from x2 to x50!

When in the first stage of the mini-game, the available multiplier values will be x2, x3, x5, and x15. Should a player be lucky enough to hit the "extra chance" field, they will enter the elevated stage of the mini-game that will give players the chance to score one of the following multipliers – x10, x20, x30, and x50. In addition to the multiplier values, these mini-games will also serve an additional function that will be discussed further down.

Activating the Free Spins Can Be a Bit Challenging

Given the fact that the Power Pellet is defined as a scatter symbol, collecting three of them in any arrangement on the layout interface will enable eight free spins. Once the FS are granted, the entire game will transform into a 9x5 reel layout slot, increasing not only the chance for scoring additional wins but effectively tripling the number of paylines. We should also mention that although the symbols landed in the FS mode are the same as the ones in the base game, they will have their own paytable, along with distinct winning values.

Although the additional silver reel strip will still be present at the very top of the “tall slot”, in a sense, its functionality will be somewhat limited. What this means, is that the Key symbol will not be present during the Pac Man Wild Edition free spins. On the other hand, if you manage to score a Pac-Man symbol on the extra reel, it will still transform all nine rows beneath it into one giant, wild reel. Naturally, the same rules about symbol substitutions will apply here.

If you like one jackpot, then you will definitely love four of them. The Pac Man Wild Edition slot machine offers a Mini, Minor, Major, and a Grand jackpot! Depending on which one you win, you can score as little as 20 units of currency or reach the top prize of more than 10,000 units of currency.

If you're wondering how to get them, it will be trickier than expected. First and foremost, the player will need to trigger the bonus function of the extra reel while in basic gameplay mode. The second step is to land the "extra chance" field and then hope that the following feature will land on one of the available jackpot fields there. 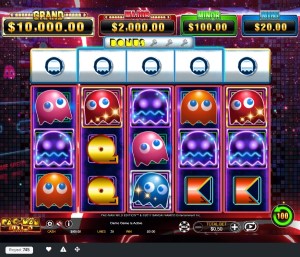 Pac Man Wild Edition is a slot with 25 pay lines, which will increase to 75 once the bonus rounds gameplay mode is engaged. Wins will pay left to right, and if you're eager to play right away, all you have to do is set the value of your bet and hit that spin button. Speaking of wager amounts, the smallest amount you can play with is 0.50 units of currency, while the maximum – 20.

Speaking about the Pac Man Wild Edition slot RTP rate, it is listed to be 94.20%. If we are to judge by the latest iGaming industry standards, this is considered to be a little on the lower side of the 96% average, but it isn't something to obsess over. Given the fact that the game is listed to have a low volatility rate, it is expected that players will land successful combinations much more often, albeit they will produce minor rewards.

Ainsworth (UKGC #40260) created Pac Man Wild Edition to be true to the roots of the brand it is licensed and certificated (#MO-158-AWG-18-06) on, which can be discerned from the quality of the sounds and visuals. The colour palette and the 8-bit sound scheme that have been used here, are exactly the same as the ones that are present in the arcade version of the game from the 80s!

The Pac Man Slot Is Made for Mobile

Ainsworth Gaming Technology has definitely gone all out to design the The Pac Man Slot game in a way that runs flawlessly on Android and iOS devices.Regardless of what type of smartphone or tablet you decide to play on, all you have to do is load up your most recently updated browser app, and you will be able to experience it without any hassle. The fact that the slot was made with the HTML5 software platform, makes it one of the best ones to play on your preferred mobile device.

At first glance, many players get the impression that the Pac Man Wild Edition slot game is another title that heavily banks on the "nostalgia factor", which is commonly implemented these days by many developers. On the other hand, this slot manages to hold on its own by providing interesting gameplay, fair rewards, and decent jackpots. If you can try it out for yourself, you might just be entertained!

Of course! The Pac Man Wild Edition slot allows players to get even more free spins - all they have to do, is to be lucky enough to land three Power Pellet symbols during FS mode. We should mention, however, that this might be a bit more difficult because of the fact that the special scatter symbols appear at a much lower frequency than other symbols.

Ainsworth has made the Pac Man Wild Edition slot to be playable both for real money and in demo mode as well. An interesting fact is that the developer states that there is absolutely no difference between the two versions of the game! Whether you decide to try it out risk-free or for real money is your choice, but you should know that "practice play" wont be available in all casinos.

It"s quite easy, actually. Right next to the spin button, you can press on the "auto games" and adjust the slider to how many spins you would like to process on automation. The minimum is 5, while the maximum – 25. Because there are no additional "feature disable conditions", you will need to stop it manually if you dont want to play any more auto spins. You can do so by simply pressing the spin button again!