In 2016, the Bonanza Megaways slot machine hit the online gambling industry, immediately attracting the attention of iGaming critics and players worldwide. Created by the legendary Australian software developer Big Time Gaming, this slot impressed and inspired every person that tried it. What is even more impressive, is that in addition to its many bonus features and useful mechanics, the game was voted by many media outlets to be one of the “top 10 online slots of all time”, and today continues to enjoy a significant amount of attention. This Bonanza Megaways Slot review will provide you with everything you would like to find out about the game. 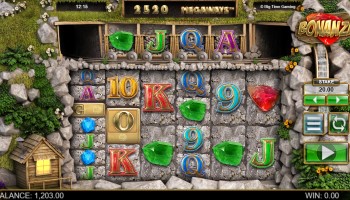 Although there is no indication that the game tells a particular story, players can create a story of their own - by becoming prospectors in a bountiful mine! That's right, the Bonanza Megaways slot is modelled after an old-time mine, where gold and precious gems are bountiful. This ore mine hides many treasures within, and it's up to the player to keep the reels spinning, as well as the mine trolleys moving!

The game features outstanding graphics that are all rendered in crisp HD quality, which makes it a joy to play the slot regardless of the size of your device's screen.

The Abundant Features of the Bonanza Megaways Slot Machine 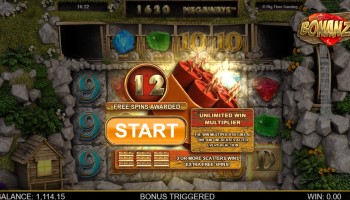 Being a game from a much newer generation, the Bonanza Megaways slot machine implements an innovative layout that has a 6+1-reel design. Because of BTG’s original Megaways™ gameplay mechanic, the rows generated by every reel can produce up to 7 symbols in total (except for the horizontal reel)! The game uses 12 symbols in total, which are separated into low paying (9, 10, J, Q, K, A), high paying (Green Gem, Blue Gem, Red Gem, Purple Gem) and special (Gold Bar Scatter, Dynamite Wild). You can check out the game for real money or in demo mode in the following online gambling establishments:

Given the fact that Gold Bar scatter symbols can appear on every reel (except on the horizontal one), all 42 symbol positions can theoretically fill up with scatters. While the chance for this happening is considered to be “below microscopic” the game will give one very lucky player 202 free spins. One of the best parts about the free spins themselves is that they can be retriggered. During FS mode, If you land 3 scatters in the horizontal reel, you will get 5 FS; however, if you land 4, you will get 10 more! If you're lucky enough, you can retrigger the feature indefinitely!

Continuous Wins Will Enhance Your Earnings 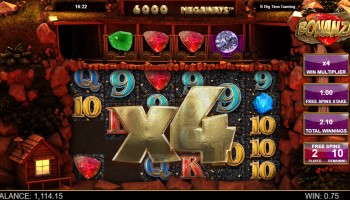 The “Unlimited Win Multiplier” is one of the best-defining features of the Bonanza Megaways slot game, and it allows the player to earn more with each win they score. This mechanic activates once the player has activated the game’s free spins mode. Essentially, every time after a spin produces a winning combination, the win multiplier will activate and increase for each subsequent time a symbol combination destroys and cascades the reels.

One of the best traits of this feature, is that that you don’t need to worry about the win multiplier value resetting itself. Whether the game continues to score a winning combination after additional cascades or initiates another spin, the multiplier will continue to increase its value. The more spins you have, the better chances you will have of raising the multiplier even further!

No Jackpot but a Massive Win

Although the Bonanza Megaways slot doesn't have any type of jackpot, that doesn't mean that you won't have the opportunity to win a lot of money.

The game states that the maximum win that can be achieved is an amazing x26,000 times of a player's bet.

If we calculate this with the highest possible bet settings in the game, you will be looking at a potential prize of 520,000 credits!

How to Play Bonanza Megaways – Basic Specs and Controls Guide

An exceptionally easy game to play, all that is required of you to properly experience the Bonanza Megaways slot machine, is to set your preferred bet amount and hit the spin button. This title has 117,649 winning ways instead of pay lines, which means that all you have to do, is match a number of adjacent symbols from left to right. With that being said, you can place as little as 0.20 credits per spin (BPS), or go all out and place 20 credits per roll.

The Bonanza Megaways slot RTP rate is exactly 96%, which is considered to be good by industry standards. With a medium-to-high volatility factor, the formation of successful symbol combos isn't expected to be quite often; however, because of the cascading mechanics, there is a good chance for a follow-up win after scoring a good spin. 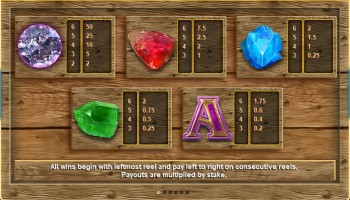 You will notice that regardless of how you tweak your bet, the values shown in the symbols paytable will remain the same - due to the simple fact that those are not credit values, rather than multiplier values. With that being said, we calculated that the lowest possible prize comes from a combination of three 9's that have an x0.10 multiplier value.

If applied to the smallest BPS, the expected reward will be 0.02 credits. If you're lucky enough to land six purple gems, you will get an x50 symbol combo multiplier, which will yield a reward of 1,000 credits (at the highest BPS).

The Sound and Visuals Are Exceptional

While the storyline here is quite lacking, the graphic and audio designs are done superbly. Given the fact that the game was developed on the HTML5 platform, all of the element animations feel incredibly smooth and pleasing to the eye. If we would have to compare the Bonanza Megaways slot game to any other title produced by BTG, this is definitely one of their "top 10 best-looking" ones. 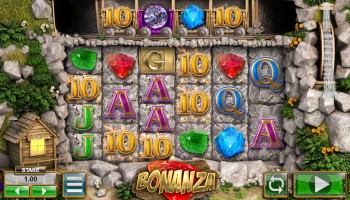 The Bonanza Megaways slot game is available in instant play mode, for all conventional computer and mobile platforms. People with Android and iOS-based mobile devices will be able to play the game with the majority of mobile browser apps today, as long as they are HTML5-optimized. Although the game’s interface and controls are already optimized for use with smartphones and tablets, it will shift and modify itself based on the screen of the device.

There is another version of this game, called the Bonanza Megapays™. It is the second instalment in the Bonanza series, and while it does look almost identical to the other slot, there are a few additions that players enjoy.

The most significant one, is the introduction of four different jackpots, the largest of which can reach more than £200,000!

A Title That Will Always Be Popular

Big Time Gaming not only changed the iGaming industry with the creation of the Megaways™ gameplay feature, but also ushered a new standard for slots with its creation of the Bonanza slot series. Although there are some minor drawbacks (such as lack of spin speed control, a more detailed autoplay mechanic, etc.), this game still continues to be excellent. If you want to play a title that has superb balance, looks beautiful, and is ideal for both beginner and advanced players, then best new casinos for the Bonanza Megaways slot might be the one you're looking for!

The game was launched by BTG in 2016 and was considered to be one of the first (new age) slots that arrived in the iGaming world. Because of its innovative design and features, it not only became popular quite fast, but also inspired other developers to create similar slots based on the technology used in Bonanza. In fact, the Megaways™ technology is often leased to different companies who want to use it for their own games.

The answer to that question is 96%. The reason why we described this value as beneficial, is that a few years ago the standardly accepted value was about 94%, which today is considered to be quite low.

After running a series of tests, we concluded that a regular (non-winning) spin, will take approximately 5 seconds, from start to finish. Unfortunately, there is no way for players to speed up the game. Veteran slot players will also notice that they won't be able to perform a "slam-stop" tactic.