BTG is a software development company that changed the iGaming industry with its creation of the widely popular slot gameplay mechanics Megaways™. In 2018, BTG launched the widely successful Book of Gods slot game, which became popular almost immediately after its release. The slot's popularity rose swiftly not only because of its developer's fame, but also because of its incredible gameplay merits. This Book of Gods slot review focuses deeply on the title’s gameplay features and mechanics, and also explains why the best new casinos offer it today! 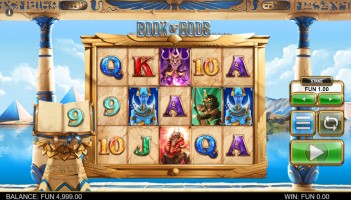 Getting the obvious out of the way first, the Book of Gods slot game doesn't have a set storyline; however, we can deduct from the presence of the different divine figures depicted here, that it has to do something with uncovering the treasures of four of the most famous divine figures from the mythology of ancient Egypt. Neith, Bastet, Horus, and Osiris are the central figures in the Book of Gods slot machine, and if we had to guess, the player's mission is to spin the reels and uncover the numerous treasures that are hidden within the temple's walls.

All Features in the Book of Gods Slot Game Are Spectacular

This slot has a standard 5x3 reel layout, with a little symbol "twist" explained further below. The symbols used in this divine game are 11 - Golden Book, Bastet, Horus, Neith, Osiris, A, K, Q, J, 10, and 9. The game has a variety of bonus features that are triggered when specific conditions are met. You can play the Book of Gods slot machine for real money or try it in demo mode in a variety of casinos that offer BTG titles. Some of those online gambling establishments include names such as:

While the majority of slots today tend to assign multiple functions to a single symbol, in the Cherry Blast they are all separated - which is why there are so many available symbols to begin with. For example, the Wild will only serve as a substitute for all other symbols (except for the special ones), while the Scatter will only produce wins, regardless of where it lands on the reels. 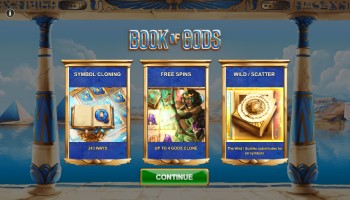 The symbols book that is positioned on the left side of the reels will shuffle through the pages every time a player initiates a spin. Right before a spin is concluded, the book will choose one symbol between A and 9.

If the spin lands three symbols of the same type that was generated on the book, those will clone themselves on the entire reel they are on, producing big payouts.

The Wild and Scatter Symbol Is the Same 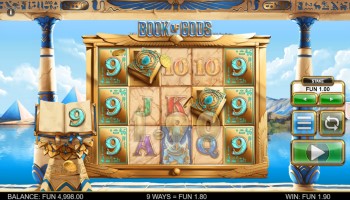 The Golden Book symbol is not only considered to be the highest paying in the Book of Gods slot game, but will also act as a wild that substitutes all other symbols.

If that wasn't enough, the book itself acts as a scatter that will pay anywhere, regardless of its position on the reels, and activate a number of free spins.

The Free Spins Uncover a Different Type of Gameplay

Getting three Gold Book symbols will grant you 15 free spins; four books provide 20 FS, and five will result in the game dispensing 25 free spins! During FS mode, the symbol book on the left will shuffle only through god symbols, and the cloning mechanic will act as an "expander" for any god symbols of the same type.

While in FS mode, players can hope to land even more Golden Book symbols - if they do, they will retrigger the feature with additional FS, while another god symbol is added to the cloning symbol book to the left! Once all god symbols are added, any further retriggers of the feature will only grant additional free spins.

Basic Instructions and Specifications of the Book of Gods

One of the best basic features of the Book of Gods slot game, is the fact that it doesn't feature regular pay lines, but 243 winning ways. This means that winning symbol combinations will be formed from adjacent symbols from left to right. The Book of Gods slot RTP rate is 96.35%, which is quite good compared to the iGaming industry standard of 95%.

Playing this Egyptian slot is quite easy - all you have to do is decide how much you would like to spend per spin. If there is one thing you should be paying particular attention to, it will be the game's volatility factor - which is classified as "high". With that being said, you should expect the game to form successful symbol combinations not as often as you would like; however, the resulting payouts even from the smallest wins can be significant.

How to Set Up Your Bet and Maximum Wins 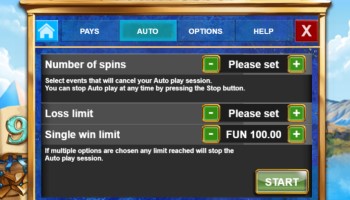 With a betting range between £0.20 and £20 per spin, you will definitely have the chance to try out a number of betting strategies. By using the arrows located below the displayed bet amount, you can adjust how much you want to spend. The only drawback of the betting range is that it isn't very wide - £20 for a maximum bet hardly makes the Book of Gods slot game a title for high rollers.

The largest sum of money you will have the chance of winning here, is classified to be x10,000 times your bet! If you're playing the game at its lowest bet settings, this will yield an approximate reward of £2,000; however, if you've paid £20 for your winning spin, then you will find yourself raking a payout of £200,000!

Development Technology and Quality of the Game's Software Elements

Big Time Gaming has used the HTML5 platform to work wonders with the Book of Gods slot machine. All of the animations, sound effects, and visual artwork are stunning. The crisp HD graphics allow players to view the gleam and shine of the slot on any type of screen, while the optimized function of the game will make every visual effect transition seem smooth like butter.

The Book of Gods slot machine is for instant play only - which is good, because you don't have to download anything. With that being said, the game is mobile optimized for Android and iOS devices. If you're someone who enjoys spinning reels on their smartphones or tablets, simply load the game via your preferred mobile browser application.

The Book of Gods Is Popular Because of Its Simplicity

The Book of Gods slot doesn't seem to have anything wrong with it; in fact, it's the opposite! As a slot with many bonus features, this title doesn't have "clutter" that would impede your gameplay experience. The cloning symbol feature in particular, provides a refreshing variation from the standard slot gameplay you would expect, and the fact that you can retrigger the FS mechanic, makes the Book of Gods slot quite a generous title. We have to warn you, however - if you try it, you might like it very much!

You can check out the list with casino names we have provided above. This game is considered to be widely available, and even if the casino you're playing in doesn't feature all of BTG's titles, the Book of Gods slot game will definitely be present there.

Book of Gods was developed, released, and distributed by the company Big Time Gaming. BTG are a renowned iGaming company from Australia, that are popular for introducing a variety of slot mechanics that often become the new industry standard.

As many times as your luck allows it! The Book of Gods slot machine is one of the few online casino games that have an FS feature with many bonuses, and gives the player a chance to keep reactivating free spins indefinitely!