Nolimit City is a full online gambling solutions provider that was established in 2013. With offices located in Sweden and Malta, Nolimit is a company that not only creates high-quality games for the online casino industry but also develops and supplies a fully customisable game package to online casino operators everywhere. In this review, we will evaluate the products offered by this software developer, and also explore the company’s journey to becoming one of the most respected casino game makers in the iGaming industry.

There are 27 games in total made by Nolimit City, all of which are slots! Almost all of them support more than 100 currencies, a multitude of languages, and many controls and features that can be fully customised based on the preferences of the casino operator. Below, you can read more about the slots themselves.

All of the Slots Are Exceptional

The first thing about all slot games of Nolimit City is that they are fully original – you won’t find any games that will look like famous brands from numerous franchises. All of the slot games will have several features, but it isn’t unusual to see some having more than most. We have analysed some of the most popular slots made by Nolimit City and have presented them for you below.

Nolimit City is a company that is licensed and regulated by the two most renowned authorities in the iGaming industry - the United Kingdom Gambling Commission (license number: 52097) and the Malta Gaming Authority. Although it isn’t specifically mentioned, the possession of those licenses signifies that the company’s software products have undergone many significant technical tests which were conducted by industry known laboratories. After all, a certification for offering fair and secure software is required when applying for a license from the UKGC.

Mobile Compatibility and Use of Developing Technology 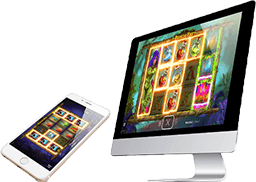 Being a company established after 2010, it comes to us as no surprise that Nolimit City utilises the software development platform HTML5 in order to produce its games. HTML is regarded as the best technology when it comes to producing online casino games for mobile platforms, and you can be sure that all games made by Nolimit will be supported by the most popular mobile operating systems Android and iOS. In fact, if you hover your mouse cursor on any of the titles presented in Nolimit’s gaming portfolio, you will see that they are fully compatible with any computer, tablet, and smartphone.

There Are Unique Features Made by Nolimit City

There are only a handful of providers that have created their own unique slot features, and Nolimit City is one of them, with its creation of “xNudge”, and “xWays”. The xNudge is a feature that will move a reel once it has stopped, putting all of the reel’s symbols in full view, while xWays is another feature that can turn one special mystery symbol into up to four separate ones. Those features are not only entertaining but also increase the winning chance and winning lines of players.

The News Section Provides Further Insight on the Company

On the news page of Nolimit’s website, readers can learn a lot more about the most recent achievements of the company. Additionally, this is the first place where Nolimit will announce the arrival of any new games. While this may be unfortunate for some, the company doesn’t feature quick links to any social media accounts; however, the company does have them. In fact, after a quick research session we found out that Nolimit City is quite active in Facebook and Instagram, so if you are interested in getting the most recent information about the company, you can start from there.

The Family of Business Partners Include Some Big Industry Names

In fact, there are more than 100 different companies that utilise Nolimit’s games or software solutions in one way or the other. Some of the most famous partners of this developer include Casumo, Guts, EveryMatrix, Mr Green, Rizk, Royal Panda, Wunderino, William Hill, and so many others. Nolimit City also has a broad network of industry-renowned affiliate promoters, which take care of the company’s presence in the online market.

Nolimit City’s independence from other systems allows the company to go much further in the creation and customisation of its gaming software. The visual and mechanics processing quality of all Nolimit’s titles continues to remain as a leading factor in the iGaming industry, which is why the company continues to attract many new business partners. We don’t doubt for a moment that Nolimit City is going to surprise us in the future with even more games and innovative feature designs!