Known as a developer, aggregator, supplier, and white label casino solutions provider, SoftSwiss is a company that started making headlines since it was established in 2008. Although SoftSwiss seems to be dedicated to the provision of various online casino gaming products and services, they are equally devoted to supplying other solutions such as game aggregation, sports betting platform accommodation, and affiliate marketing engagement, among others. In today’s analysis, we will explore SoftSwiss as a business and also determine if its products and services are good enough to define the company as an iGaming industry leader.

A Colossal Collection of Casino Games

The casino gaming portfolio of SoftSwiss contains more than 10,000 titles! Granted, those are offered through the aggregation platform of SoftSwiss and are provided by the many gaming studios that have partnered up with the company. On the other hand, the business does have its own game design and development studio called “BGaming”. SoftSwiss’ studio has produced approximately 59 games, the majority of them being slots; however, they also have made a few roulette titles, cards, table, and speciality titles. Although SoftSwiss continues to exponentially grow their game aggregation platform, BGaming continues to produce new titles for them even today.

At this point in time, there are approximately 35 slot titles made by BGaming. They are all designed with original themes, feature crisp, HD graphics, and are predominantly made in the classic 5x3 reel layout. By examining the overall slots, we’ve come to the conclusion that they come with either a minimal or moderate amount of bonus features. We have performed an even further analysis of SoftSwiss’ native gaming portfolio below.

The development studio of SoftSwiss has made approximately 15 table games, but make no mistake – they are not mere variants of the same genre. Casino operator customers of this provider will be able to add to their gaming rosters titles such as Baccarat, Blackjack, Pontoon, Caribbean Poker, Roulette, and quite a few others. Nearly all table games are produced with stunning 3D graphics and animations, transforming the playing experience into a truly exclusive one.

The Specialty Games Are Unique

When it comes to gameplay diversification, SoftSwiss has made sure that they are “as various” as possible; however, they are all bound by the fact that they are all extremely easy to play. Perhaps the best example to illustrate this fact is by describing SoftSwiss’ title “Heads and Tails”. Pure and simple with a 50% chance to win, the only action that a player is required to make is to bet on heads or tails; in fact, once this is done, the coin will spin automatically.

While SoftSwiss doesn’t produce live casino games, their aggregation platform includes the lobbies of all the most famous developers and providers in the entire iGaming industry. Card games, table games, game shows – these and absolutely all other titles that come in live dealer form, are provided by companies like Evolution Gaming, Pragmatic Play, NetEnt Live, Playtech, Microgaming, Authentic Gaming and others. 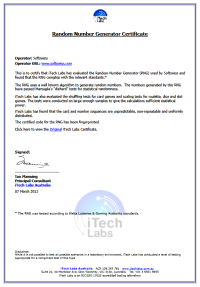 This “behemoth of a business” is licensed by the most famous jurisdictions in the iGaming world – the United Kingdom, Curacao, Malta, Gibraltar, Alderney, Isle of Man, Belgium, Denmark, Estonia, Italy, Costa Rica, and Kahnawake! Jurisdictional recognition is vital in the iGaming industry, which is why SoftSwiss doesn’t make compromises if we are to judge by their legal achievements. The company also possesses a certificate for offering secure and fair iGaming software by iTech Labs.

What is even more impressive, is that they provide full assistance to their white label customers who wish to obtain a license for their own casino or sportsbook brand. As an aggregation platform provider, SoftSwiss only works with other gaming software developers that are licensed and adhere to the same quality standards as the aggregator itself.

All of the games aggregated within SoftSwiss’ platform are supported by all commercially available smartphones and tablets. Both the games of the company’s partners and the titles of its native development studio are created with the use of HTML5. This software development platform is considered to be the golden standard in the iGaming industry.

An interesting fact is that the native games of SoftSwiss are designed in such a way, that the controls themselves are placed in a way that accommodates their comfortable operation on smartphones and tablets. The bottom line is this - all of the games offered by SoftSwiss, are fully compatible with Android, iOS, macOS, and Windows-operating devices.

With more than 300 employees, this Belarusian-based business has offices in a number of other countries. When the company was initially established, they started out as an IT development business, that offered a number of software creation services. In 2012, a part of the company known as SoftSwiss Games was rebranded to BGaming, which is how the studio came to be. A year later, It was in 2013 when they updated their business model and started offering complete “turnkey” online gambling products and services. The business mission of SoftSwiss is to provide its customers with the most flexible iGaming solutions worldwide.

Specific and Unique Gaming Features by SoftSwiss and BGaming

One of the unique features of SoftSwiss’ slots, gives players the ability to check the “provability” (randomness) factor of every slot spin, by each individual reel. Additionally, all BGaming titles are fully compatible with types of currencies, including cryptocurrencies, and virtual casino-brand currency as well! As a company that is defined as the “number one provider of crypto gambling software”, SoftSwiss continues to introduce additional innovations within the iGaming industry.

The official news section of SoftSwiss, describes their every business move in the iGaming industry since their conception. People that are interested in the company will be able to inform themselves about the aggregator’s latest business deals, game releases, and everything else concerning SoftSwiss. The company also has profiles in networks such as Facebook, Twitter, and LinkedIn; however, the most relevant and regularly updated information will come from Facebook, and the news page on the official website.

How Does SoftSwiss Compare to Other Companies in the Industry?

The company may “play nice” with others in the iGaming industry, but it is definitely not afraid to compare itself with giants such as Microgaming and Playtech. SoftSwiss might not have the same scale as the two businesses mentioned above, but they are also big. What makes them unique and gives them an “edge” among the others is the flexibility of their products and their customer accommodation factor! SoftSwiss is a business that openly states that they are glad to work with small start-up companies as well as with already established brands.

It is an all-known fact that the largest iGaming companies today prefer to work with others of the same calibre, so when it comes to customer versatility, SoftSwiss wins this round. Furthermore, SoftSwiss always takes a somewhat “personalised” approach when it comes to the pricing of their services, and they do everything in their power to make sure an estimate is fair to the financial abilities of their customers. This is one of the main reasons why the best new casinos online today are working with this company.

The Company Will Continue to Excel in the iGaming Industry

For a business that has a little more over a decade of experience, SoftSwiss has managed to climb to the highest levels of the iGaming industry. Even today, the company continues to acquire additional business partners and grow its game aggregation capabilities even further. Regardless of this company’s success, we would love to see what would happen if they develop their own live casino services – maybe in the next few years, we will!