The iGaming industry witnessed the rise of a new type of game when the Blood Queen slot machine was released in 2017. Created by the software developing company Iron Dog Studio (IDS), this slot quickly managed to impress millions of players worldwide, shortly after it was launched. Its numerous gameplay features, original artwork, and responsive functionality, promptly made it a desirable piece of software for the best new casinos online in the UK. This Blood Queen slot review not only provides a complete analysis of the game in its entirety, but also offers a few hints that you might find useful!

The Action-Adventure Plot of the Blood Queen Slot Game 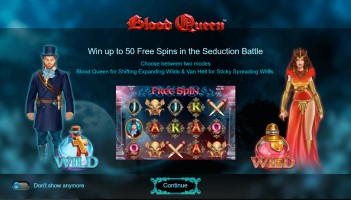 While there is no indication who the “Blood Queen” actually is, the plot of the game becomes quite clear from the presence of the other titular character – “Van Hell”. This prolific hunter is seemingly situated in the castle of the queen herself, and he is about to make sure that she is defeated.

Although this game doesn’t seem to explain what happens between the vampire queen and the prolific hunter, players of the Blood Queen slot game can make their own conclusions of what happens next.

The Main Features of the Blood Queen Slot Machine Are Impressive

The Blood Queen slot game works with a 3x5 reel layout, which is considered to be the iGaming industry standard for all software developers. The game itself operates with the use of 13 symbols, four of which are low-paying, three are mid-paying, and two are high-paying ones.

The remaining symbols will perform special functions during bonus features. The symbols themselves, are listed as J, Q, K, A, Stakes, Vampire, Red Jewel, Van Hell, Blood Queen, Gargoyle, Heart Pair, Holly Water, and Blood Potion. If you’re interested in seeing them in action, the Blood Queen slot machine can be experienced (for real money or in demo mode) in the following casinos: 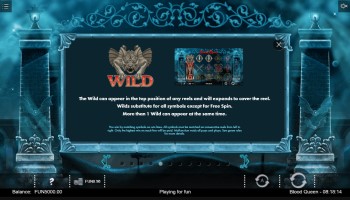 Designated as the game’s “base wild” symbol, a Gargoyle will substitute all other symbols (except for the Heart Pair). Another incredible benefit is that every time the Gargoyle appears, it will expand to cover an entire reel.

With that being said, you can expect these wilds to land only on the top part of each reel. The best thing about the Gargoyle, is that more than one symbol can be landed at the same time. 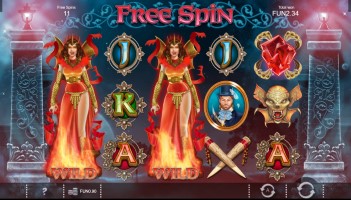 If you’ve managed to collect at least three heart-shaped symbols (also referred to as the free spin symbol), the game will grant you 20 free spins (FS). Four Heart Pair symbols will give you 30 FS, and you can expect 50 FS, if you’ve landed 5 of them.

Prior to the initiation of the bonus game mode, the Blood Queen slot game will provide you with two gameplay modifier choices. The additional bonus symbols and mechanics you will experience, will depend on you choosing Van Hell or the Blood Queen.

The Basic Specifications of the Blood Queen Slot Game

The Blood Queen slot machine has 30 fixed paylines, - this considerably makes the game easier, as all it's required from the player is to adjust the value of their bet and press the spin button. Many players define the Blood Queen slot RTP to be quite generous, as it boasts a value of 96.06%! In addition to its “above-average” rate, you can expect to land winning combinations relatively often, as the slot’s volatility factor is listed to be “medium”. Although the value of any wins will be largely determined by the size of your bet, a good rule of thumb is that the smallest payout will be given by a combo of three Js or Qs, while the biggest – from five Blood Queen symbols.

Understanding the Betting System of the Game

The game uses 30 coins minimum per spin. Players cannot change that; however, the way they increase their bet per spin (BPS), is by adjusting the monetary value of each coin. With that being said, the smallest BPS value here is listed to be £0.30, while the largest – £4.50. Another unique cosmetic feature in the Blood Queen slot game, is that it allows players to choose how they want to see their money balance – in coins or in cash. The maximum achievable payout per round, is listed to be 75,000 coins.

The smallest number of spins you can process on automation is 5, while the largest – 999. You can choose to engage the game in auto mode and stop it manually whenever you want to, or you can program a set of feature-disabling conditions that will deactivate the mechanic when they are fulfilled.

The Slot Has Superior Graphics and Sound Effects

The Blood Queen slot game might be based on the popular theme of vampires; however, what made a positive impression on us, is that it is completely original. While the concepts of the characters are taken from pop culture references, the art is nothing like we’ve ever seen before, which is a definite plus for IDS. By using HD vector graphics, the developer has managed to create a slot that looks impressive on any type of device, which is why both PC and mobile players enjoy the Blood Queen slot game with equal satisfaction. 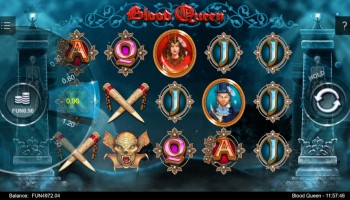 This slot is superbly optimised for use with Android and iOS. Regardless of the brand of your smartphone or tablet, all you would need to have on your mobile device to play the Blood Queen slot, is a recently updated browser. Depending on your taste for minimalistic interface controls, you might prefer to play the mobile version of the game.

The first notable difference between the Blood Queen slot mobile version and its PC counterpart, is noticed in the controls interface. If you load the game on your mobile device, you will notice that the spin and bet adjustment buttons are positioned to the sides of the screen, so players will be more comfortable with controlling the slot. Function wise – the game implements “press and hold” mechanics to bring out sub-menus for bet selection as well as autoplay feature adjustment.

A Title with an Immortal Destiny

Vampire-themed slots never seem to go out of style, and while other titles bank heavily on their visual themes to make that possible, the Iron Dog Studio Company (Football 1x2 Limited) shines with its remarkable gameplay features. Its easy-bet mechanics, steady gameplay pace, and decent payout specifications make it an ideal choice for people who have just started playing slots for real money, as well as for veterans of the genre. We definitely recommend that you should try the Blood Queen slot!

You don’t! There is no need to worry about the memory of your mobile device or computer because the Blood Queen slot has always been and always will be provided by casinos everywhere in browser form. Just make sure that your browser is properly updated.

You can expect to land Blood Potion wilds on the second, third, and fourth reel. The symbols themselves will always appear on the top of their designated reel. A definite advantage here, is that there is a chance that more than one Blood Potions can be landed after a spin.

When landed, the symbol will first start spreading vertically. With every following spin, the Holy Water wild will then spread horizontally, towards the centre of the reel layout.

By increasing your BPS while in “coin view” you will notice that your balance decreases proportionally with each change, because you are essentially increasing the currency value for every coin. Regardless of the value of your bet, the cost for each spin will remain 30 coins, and when you increase the value, the game will automatically display how many coins you actually have, based on your newest setting. If you decrease the value, you will notice that your balance will proportionally increase.

Unfortunately, this isn’t possible. The game’s Free Spin symbol already has the capacity to provide a player with many free spins. Furthermore, the addition of the special wild symbols during the bonus round mode would make it difficult for landing additional FS symbols.