When the Cherry Blast slot was released in 2017, not even its developer, the company 1x2gaming (also known online as 1x2 Network), predicted how successful it would become. By offering a number of interesting gameplay features, all neatly wrapped up in an “evergreen” slot design, Cherry Blast managed to carve its own loyal following in the iGaming world.

In this Cherry Blast slot review, we explain why the title is preferred by the best casinos online, as well as what are the different aspects that make it special. 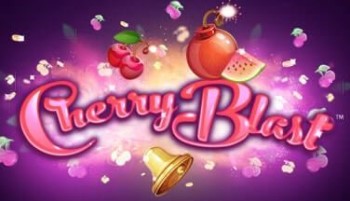 The Nostalgic Theme of the Cherry Blast Slot Game 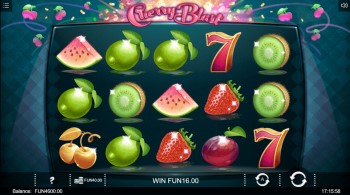 If you were to go back to the beginning of the 90s, you would see that nearly all slots featured the iconic “fruit” design. The slot looks incredible and judging by its looks, it is a clear throwback to an era of the gambling industry when games were made much simpler.

While there isn’t even a hint of a story or a plot in the Cherry Blast slot game, it doesn’t feel like it’s needed or missing.

First and foremost, Cherry Blast is a slot game that has an industry-standard 5x3 gaming layout. It has 16 symbols in total - Kiwi, Plum, Lime, Watermelon, Strawberry, Bell, Seven, Golden Cherries, Bomb, Cherry Bomb, Wild, Scatter, Star, Super Wild, Super Scatter, and the Dash Bonus Symbol. The reels operate with a classic rolling mechanic, and if you’re interested in seeing how they move, you can check out the game in some of the following casinos:

While the majority of slots today tend to assign multiple functions to a single symbol, in the Cherry Blast they are all separated - which is why there are so many available symbols to begin with. For example, the Wild will only serve as a substitute for all other symbols (except for the special ones), while the Scatter will only produce wins, regardless of where it lands on the reels. 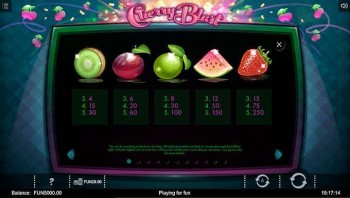 If you manage to collect a single Star symbol, you will be granted nine free spins and a monetary prize as well. Once the free spins mode is initiated, the Wild and Scatter symbols will become “super”.

The Wild will provide its substitute function while appearing only in the second, third, and fourth reel.The Super Scatter, on the other hand, will give even bigger rewards if a player manages to land more symbols of the same kind. 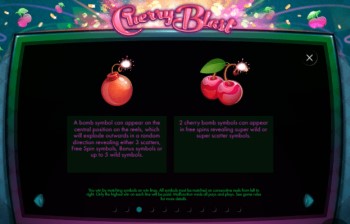 The Bomb can appear only in the middle position of the reel interface. Once it does, it will explode outwards and reveal one of the following symbols - 3 Scatters, Free Spin Stars, Bonus Symbols, or up to 5 Wilds.

We should mention, that just like any other symbol that triggers a particular feature within the Cherry Blast slot game, the Bomb symbol is known to land quite rarely.

A Mini Game That Results in Massive Wins

Players with a keen eye will notice that the bonus symbol is stylised like a Pac Man cherry, but that’s not all. Once landed, the slot will initiate a window with a maze-like layout, with the Bonus Cherry at the very top. The player will then choose one of five paths (numbered from 1 to 5), every one of which will lead to a specific reward. The numbers aren’t for posterity - they also indicate the level of risk a player is willing to take when initiating the feature. The greater the risk, the better the potential reward – after all, there is always a chance that the feature won’t award you with anything.

Real-Money Players Can Use the Game History Feature

Every time you initiate a spin, the game will automatically record its complete information after it has landed. This means that you can review the bet amount at the time, symbol position, as well as other interesting data. When it comes to demo play, however, you won’t be able to use this feature, as it is available only for real money play!

The Cherry Blast slot has 20 fixed paylines, which are all played with a single bet. Players can spend as little as 0.20 units of currency per spin or go the “high roller way” and set their BPS (bet per spin) value at 10 units of currency. Players can also adjust the Cherry Blast slot to display any winnings or bet values in either coins or currency.

The RTP of the game is listed to be 96%, which is often described by iGaming critics as being quite good. The Cherry Blast slot machine is defined as having a medium volatility factor – what this means is that winning symbol combinations are expected to land with an average frequency - neither too often, nor too rarely. 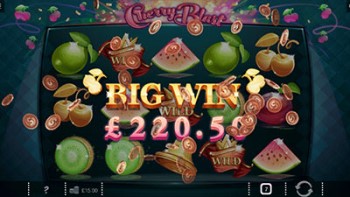 We couldn’t help but notice that the overall design of the game “screams” quality. Everything from the smoothly glowing symbols to the immersive audio effects is meant to deliver a seamless experience that will resonate with both beginners and seasoned slot players.

It should be noted that due to the fact that the Cherry Blast slot game is made with HD vector graphics, it will look equally good on all types of screens and will retain its quality even if a player decides to resize it while gaming.

Remarkable Compatibility with All Smartphones and Tablets

By using the latest versions of HTML5, 1x2 Network (#MGA/CRP/635/2018) have managed to create a slot that runs incredibly on both iOS and Android mobile devices. An interesting observation here is that the Cherry Blast slot game looks identical on any type of PC, smartphone, or tablet - this way, if you’re switching your gaming platform from time to time, you won’t have to learn new interface control positions.

Being what it is, the Cherry Blast slot machine isn’t expected to “fall out of fashion” any time soon. Whether it’s for better or for worse, slot titles that are usually based on old-time slot machines always manage to retain their popularity throughout the years, and Cherry Blast is no exception. What makes Cherry Blast truly successful, however, is the seamless integration of modern gameplay features with a modernised “retro” theme - and it works beautifully. If you have the chance to experience this title for yourself, then we recommend that you do!

Unfortunately this isn't possible, because, during free spins mode the Bomb will be replaced by the Cherry Bomb symbols. When they explode, they will produce either Super Wilds or Super Scatters. Although it is kind of a drawback that you can’t retrigger any FS, once you return to base play there is a good chance that the Bomb symbol will engage more FS.

Once you access the autoplay menu next to the spin button, you can choose to initiate between 5 and 999 spins in automation. Once enabled, you can disable the feature manually; however, the mechanic of Cherry Blast is complex, allowing for players to set automatic disable conditions. What this means, is that you can adjust the game to stop autoplay when: a win is produced, the balance is decreased or increased, or if the slot initiates a bonus feature.

If you’re a fan of fast gaming and you want to make Cherry Blast process spins at a more accelerated rate, you can do that in two ways. After navigating to the settings section of the game, all you would have to do is toggle the “fast play” button, and the slot will speed up from 3 seconds per spin, to approximately 1 second per spin. The second method is to utilise a “slam stop” action, which involves you manually starting and stopping the spin immediately, which will also take around 1 second.