This hugely entertaining slot from the highly regarded Iron Dog Studio (1x2 Network) is their first offering on the Megaways mechanic and is based on the swashbuckling pirate theme.

Released in 2019, it is proving to be extremely popular amongst online casino players.

As well as providing first class entertainment value, this is a slot with a bonus which certainly packs a punch.

The Story Behind the Pirate Kingdom Slot 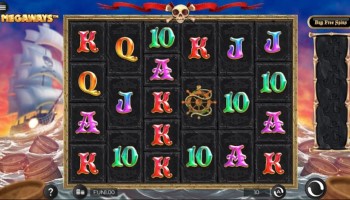 As the name suggests, the Pirate Kingdom slot is based on the popular pirate theme and as with all Iron Dog Studio games, players are flung straight into the thick of the gameplay with little doubt as to what the game is all about.

Pirates battling in the high seas is a theme that casino players and new casino sites love, and the Megaways feature means that there is always something going on with the Pirate Kingdom slot game and you can't take your eye off the action for one minute.

Just What Makes the Pirate Slot Game So Entertaining?

Other symbols include a ship's wheel, a pirate, the pirate captain of the ship, a treasure chest and a buxom maid.

There are two wild symbols, one is represented by a pair of pistols whilst the other is a wild symbol that includes a multiplier. As with all Megaways slots, when a winning pay line appears, the win is registered and then those winning symbols disappear to be replaced by new symbols, potentially forming more winning lines which is known as the tumbling reels feature.

This process will continue until no new winning lines have been formed, so as you can probably imagine, the winnings can soon mount up. Talking of winnings, let's take a closer look at the Pirate Kingdom Megaways slot machine bonuses. 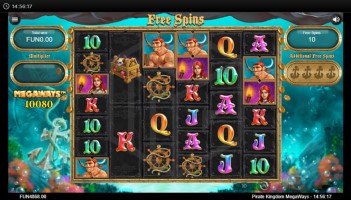 We have already spoken about the tumbling reels and how they keep repeating until there are no more winning lines. Well, the bonus is based on the tumbling reels and is triggered automatically after four consecutive tumbles with a reward of eight free spins with each additional tumble after the bonus has been triggered giving you another two free spins (up to a maximum of fourteen).

The reels can lock during the free spins if it contains seven symbols and the multiplier will increase by 1x each time. It sounds a little complicated, but all you have to do when these free spins are landed is sit back and enjoy the ride, because the winnings can very quickly mount up and when you realise that this bonus is known as the unlimited win multiplier feature, you can understand why. One more thing about these free spins that you should be aware of is that there is the option to pay for the free spins to be added to the game. The choice is to add either six, eight or ten free spins at the cost of thirty, fifty or ninety times your stake.

The choices don't end there though, because you can also add a locked reel, but you will have to pay for the privilege at forty, eighty or one hundred and thirty times your stake. A word of caution before you jump in and buy some free spins, there is no doubt that the unlimited win multiplier feature can result in some big payouts, but when you are paying up to a hundred and thirty times your stake for the privilege, it is quite a big gamble to take.

Jump Straight In and Play the Pirate Kingdom Slot Game 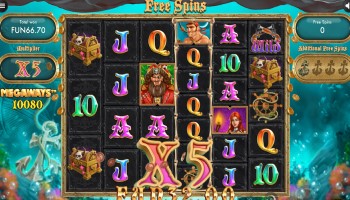 The first thing that you need to do is to choose your stake. As this is a Megaways slot, you can't change the number of paylines that you are playing, so it is a straightforward stake which covers the entire bet. The minimum is 20p and the maximum - £20.

Special mention should be made in this Pirate Kingdom slot review about the RTP (return to player) of the slot, which is 96.20%. That figure means that this is a slot with medium variance, so you should expect to see a return at least every few spins, but as always, the advice would be to start off with small stakes when playing the Pirate Kingdom slot.

What Is the Overall Feel of the Game?

We have already spoken about the symbols, but they are crisp and clear and portray the theme of the game perfectly. The background imagery of the Pirate Kingdom Megaways slot machine is excellent, with a pirate ship battling the high seas along with barrels floating around in the foreground.

Special mention should go to the soundtrack of the game, which is excellent. Very dramatic and it gets louder as each reel lands, which adds even more excitement to the game.

So, Is It Worth Playing the Pirate Kingdom Slot Game? 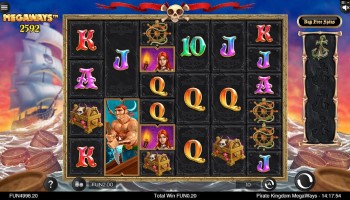 Iron Dog Studio (1x2 Network) have come up with a superb game and should be applauded as this is their first Megaways offering. The game is entertaining to play, and the free spins will make your heartbeat faster because it is possible for the winnings to really mount up. The graphics of the slot are excellent, as is the soundtrack, which really adds to the atmosphere of the game.

All in all, this is a slot that you should definitely consider playing and comes very highly recommended from this Pirate Kingdom Slot review.

To be perfectly honest, we would say no. Let's say that you pay for eight free spins with one reel locked at eighty times your stake. There is little doubt that you will see a nice return, but will it be more than your stake? That is the question you should ask yourself.

It's not brilliant but about average from the slots which we review. Don't forget that RTP figures are based on the average of over one million spins, but it does give a good indication of the volatility of a game. What it does mean with the Pirate Kingdom Slot is that you shouldn't have to encounter long losing runs.

No, with Megaways slots you only have control over the size of your stake, which in this case is between 20p and £20.