Iron Dog Studio have gone and done it again, this time with a Nordic theme game which takes the player on a wild journey to the land of the Vikings.

A slot which has it all in terms of entertaining gameplay, superb graphics and a very decent bonus which is as exciting as it is lucrative.

What Is the Story Behind the Viking Wilds Slot?

Released back in 2019, the Viking Wild slot game is a title which definitely ticks all the right boxes in terms of meeting the needs of online casino players.

The Nordic/Viking theme has always been popular, so there are people who would love the game just because of the theme alone. Thankfully though, there are a wealth of features that come part and parcel with the Viking Wilds slot game, which makes it an attractive proposition among top online casinos, even for those who don’t like the theme.

Everything You Need to Know about the Viking Wild Slot Features 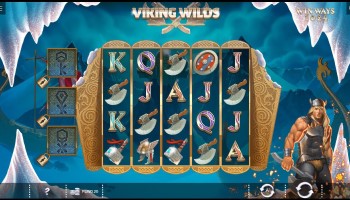 The Viking Wild slot machine has five reels, and the tumbling feature means that when a winning line is produced, the symbols which form that payline will drop down a slot and be replaced by other symbols which fall into their place.

The first thing you will notice about the Viking Wild slot machine are the symbols so let’s look at those in a little more detail.

This is one of those slots where there are not lots of symbols to remember, which many players will be pleased about, just a basic Jack, Queen, King, and Ace along with a helmet, hammer, axe, and a shield.

Three runestones of different colours are also added to the mix, but the symbols which you should really be keeping an eye out for are the ‘Wilds’, and there are three different types which can all produce exciting results when they land. The first one is the Standard Wild which will only appear on reels two, three, four and five and simply replaces the value of any other symbol.

The next one is the Sticky Wild which can only appear on reel three, but if it forms a winning payline, it doesn’t disappear but instead, drops down a place. The last wild symbol that you need to be aware of is the Expanding Wild which, just like the Standard Wild, only appears on reels two, three, four and five, and as the name suggests, when it appears, it turns the entire reel wild. 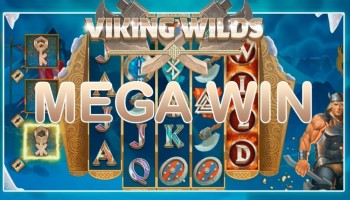 As you will see from the Viking Wild slot bonus, the wild symbols are all involved and can result in any winnings soon mounting up.

If you look to the left of reel number one, you will see that there are three keys; if you manage to land the three different types of wild symbols which relate to the keys within one series of winning spins, the bonus will be triggered.

The base point for the bonus is twelve free spins which are awarded when the free spins are triggered.

These free spins increase to fourteen, sixteen and eighteen if you get one, three and five expanding reels, respectively. To spice things up a little, if you land expanding wilds in the triggering spin, there will also be a multiplier in place of 2x, 3x or 4x.

How Do You Play the Viking Wild Slot? 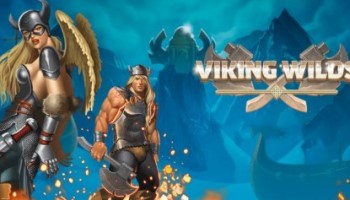 The first thing you need to do is to choose the size of your stake.

There is a minimum requirement of 20p and a maximum of £50 and the paylines are set at 1024, so they can’t be adjusted.

The larger stakes are obviously for the high rollers, but it is important that you are aware of the RTP (Return to player) figure of 96.06%.

This is about average for slots of this nature, but it does mean that the Viking Wild slot game is quite volatile, so you will experience several spins in a row without seeing a return. Bearing this in mind, using smaller stakes should be the way to go and can still result in some big wins if the bonus round is triggered.

What about the Overall Animation and Soundtrack

As part of the innovative 1X2 Network company, Iron Dog Studio (#UKGC #002266-R-320513-015) are renowned for the quality of the graphics and soundtracks on their games and this one is no different. The background display is cool and vibrant, and you can feel chills running down your spine just by looking at it.

The backing soundtrack is just like one of those epic movie classics such as Ben Hur; it feels like you are watching a film at points during the gameplay, especially when the soundtrack speeds up when the chances of the bonus round triggering gets closer. To sum up the overall soundtrack and animation of the Viking Wilds slot machine, they are first class.

All in all, the Viking Wilds slot is an excellent game to play. Before you even start playing, you will get a good feeling about the game due to the high-quality graphics and the wonderful soundtrack.

The wild symbols certainly spice up the gameplay, and even though there is not a wide variety of bonus options available, the free spins bonus which comes with this slot is more than enough to provide an extremely lucrative payout.

Yes, you can, but unless you have a large enough betting bank, it is something which you shouldn’t jump into because the volatility of this slot means that your playing balance could soon dwindle away.

Yes, you can, but it depends on the online casino where you are playing the game. If the demo version is available, you will see the option when you log into the casino and click on the link to the Viking Wilds slot.

Of course. When playing for smaller stakes, you will still be able to enjoy the game whilst also being able to get a decent sized win if the potentially lucrative free spins are triggered.