Fast forward a few years later, and this software developer had already taken the lead in many Asian countries as the best provider of online casino software. This company is not only a veteran in the iGaming industry but is also considered as an innovator as well.

The Casino Games Produced by Spadegaming

With more than 100 games in its portfolio of titles, Spadegaming can provide a powerful addition to the list of all of the best new casinos online. We should also mention that this developer doesn’t make any table games or live dealer titles – only slots. Even so, this doesn’t prevent Spadegaming to be one of the most successful developers in the iGaming industry.

All of the Slots Are Special

Casino operators won’t find any licensed titles here – Spadegaming relies on the creativity of all its professionals to produce only original titles. The “Chinese” visual theme is the most recurring one here, but that is understandable since the developer traces its roots to Asia. Below we have listed some examples of the best, most popular slots made by Spadegaming.

Spadegaming is licensed and regulated by the Malta Gaming Authority, under license number MGA/B2B/482/2018, as well as by the Government of Curacao. Not only is this developer legally recognized to do business in Europe, but also all of its games have been tested and certified for fairness and security by the famous Australian technical testing laboratory iTech Labs. The fact that an Asian software developer has gained international recognition in the iGaming industry is an impressive feat that isn’t achieved easily. 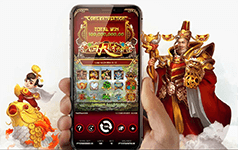 Although not all of the titles created by Spadegaming are optimised for mobile use, the slots that have been coming out for the last few years are made to run on Android and iOS. Naturally, with the advancement of development technology, the software produced by this developer adheres to the latest industry standards for quality and compatibility, allowing games to automatically resize themselves to accommodate the “screen real estate” of any mobile device and monitor on the market.

The Company Uses the Latest Developing Software for Its Products

We’ve determined that the company used both Flash and HTML as platforms for developing their games; however, they have started operating more under HTML because it is a superior platform. Spadegaming always uses the latest software platforms, which makes it possible to deliver casino games that run on all mobile and computer operating systems.

Ever since the company started out more than ten years ago, it has made an incredible progress. Their philosophy circles around the credo “more than just gaming”, which, to some degree, is reflected in the quality of their products. While Spadegaming does have worldwide recognition by the industry, the company’s plans for the future are to expand to the American and European markets. There are many companies that claimed similar business goals, but only a few of them have actually taken the necessary steps to make that happen.

Spadegaming’s achievements are made public on an “almost” monthly basis, in order to inform any potential customers and fans of the games that things are always moving forward. The company has impeccable technical support, account management, customer service, financial management, marketing solutions, and many other features that all showcase Spadegaming’s innate ability to explore and take advantage of new business opportunities with the highest chance of success.

Some of the Unique Game Features Created by Spadegaming

The newest game of Spadegaming (Heroes) is a wonderful piece of software that showcases the unique gaming features introduced by this developer. The blend of special mini-games within the slots introduces a new level of gameplay depth that has been sought after by the best new casinos online. This developer doesn’t fear of experimenting with different reel layouts, which is another reason why its games are considered unique.

The company takes pride in its professional achievements, and this is why it has a massive news section that contains the latest articles and information on new business partnerships, upcoming games, event attendances, and much more. Spadegaming also has its own social media accounts on Facebook, LinkedIn, and YouTube, where they present their most recent achievements.

When it comes to achieving the title “leading developer in Asia”, no other company comes close to Spadegaming. Even on any continents, there are but a few software developers that can match the quality of the slots of Spadegaming. While this developer surely lacks “gaming variety”, this isn’t considered to be a “con”; after all, the company is dedicated to creating only slots.

Gambling and Care for the Players

Although the developer isn’t affiliated with any organizations that are meant to tackle problems with gambling addiction, they have incorporated age verification procedures for every single one of their gaming titles. The developer itself promotes responsible gaming, as well as adherence to the gambling laws of every specific jurisdiction.

Spadegaming proudly states the fact that they have over 100 online casinos as customers, some of which include names like GPK, BBIN, LEBO GAMING, W88, Deluxe Gold, Inplay Matrix, Hongtu Game, Oriental Game, and many others. Many European casinos have expressed their interest in working with Spadegaming, and many have started doing just that, since the developer’s recent acquisition of an EU license.

In Conclusion – an Achievement-Driven Company

With so many things said about this developer, it comes as no surprise why the best new online casinos want to work with Spadegaming – especially those in Asia. This developing company doesn’t only have the ambition to be one of the most serious “players” in the iGaming industry, but they have also shown that they have the resources and willpower to be one. We will be more than happy to see how Spadegaming will impress us in the future.