Although there are clues about August Gaming to launch online in 2014, this software developer officially started its services in 2015. The initial goal of this software developer and provider was to expand into the Asian market, which is why most of its games have a recurring “Chinese” theme – but that’s not all. August Gaming managed to impress both its critics and customers by delivering a variety of online casino solutions, which are still popular in the iGaming industry today. Learn everything about August Gaming right here!

The Games Made by This Software Developer

So far there are 19 games made available in the portfolio of August Gaming, all of which are slots. Although this developer seems to be focused creating games in one genre, August has revealed that they have “lottery” and “scratch card” categories available, which indicates that the developer is planning on releasing a bigger variety of online games in the future.

The Slots Are Mostly Asian Oriented

It comes as no surprise that a good portion of August’s slots is modelled after Chinese mythology and Asian fortune symbols. The games themselves feature incredibly vivid graphics, which are combined with smoothly transitioning effects – providing an immersive and seamless gameplay experience. We have analysed the most notable examples of August Gaming’s slots below.

The Developer’s Licenses and Certificates

August Gaming possesses a Curacao eGaming License. In addition to being licensed, authorised and regulated by the Government of Curacao, the developer’s RNG has been audited, tested and certified by the technical systems testing service provider iTech Labs. Testing the RNG of the software developer has been done in accordance with the requirements set by the famous United Kingdom Gambling Commission.

All of the developer’s gaming software seems to be perfectly optimised for use with Android and iOS-based mobile operating systems. We were happy to discover that the games’ “behaviour” on both mobile and desktop platforms was equally solid.

By testing out the majority of August’s games, we’ve determined that they have been made using the HTML5 software development platform. This ensures not only superior compatibility with a variety of online casino frameworks but also allows the developer to implement a much greater number of features and visual elements within the games themselves.

The company’s mission has always been to create and reinvent online casino gaming as we know it. Their business goal includes not only to be a market leader but to also have the proper worldwide recognition of their software’s quality. It is interesting how initially August started out as a game developing company bent on dominating the Asian market. Still, after witnessing their own success, they eventually entered the iGaming landscape of Europe as well – and they continue to develop in it today!

Specific Game Features of This Developer

First and foremost is the overall “retro feel” of all August Gaming slots. Although featuring crisp and clean graphics, the style of all games is definitely reminiscent of “last decade” slots that were made on the outdated “Flash” platform; however, the smooth loading times and impeccable operation reveal that these classic-looking games are packing the newest HTML5 technology.

Although this developer has been successful in producing both industry-competitive games and gathering some big-name business allies, the company has not thought about expanding its social media presence. This could be due to the fact that that August Gaming is more B2B (business to business) oriented; however, this doesn’t seem to be a challenge worth the company’s time.

The fact that the company lacks any social media accounts is not an indication that it lacks the proper channels of informing its present and potential customers about its professional progress and upcoming software products. August Gaming offers an extensive “News” section to its readers, where they inform the public about their latest achievements in the iGaming industry.

When it comes to the quality of the games, August is a developer that can easily be considered as one of the leading companies that specialises in the making of Asian-themed slots. They also rank pretty well when it comes to the solid functionality and compatibility of their gaming software. With that being said, we can easily say that August Gaming definitely outranks many other companies in the same class.

Gambling and Care for the Players

The developer rightfully states that it doesn’t have any direct relationship with the players, as it is a “business to business” company. Nevertheless, August Gaming believes in responsible gaming, and this is why they feel the need to encourage all of their players to make sure that they abide by the legal age laws of their jurisdictions, and do any online gambling in a safe environment. 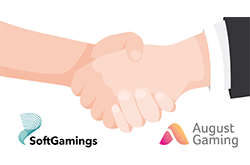 When it comes to doing business with others, August Gaming is a developer that prefers other developers as customers. Although they do have their own casino titles, they prefer to be the company that offers outstanding outsourcing services to other companies, such as EveryMatrix, and SoftGamings. This, however, doesn’t mean that August doesn’t do business with online casinos – in fact, some of the best new casinos online that utilise this developer’s games include names such as – 1xBet, BetChan, PlayAmo, Cherry Casino, Loki Casino, Melbet, and many others.

As a relatively young company, August Gaming is still in the process of making its mark on the iGaming industry. On the other hand, the gaming software and online casino solutions it provides, are held in high regard by the company’s partners and customers. As we have witnessed for ourselves, August Gaming has the incredible tendency to grow. This means that we expect to see more great things from this company!